Captain America is one of Marvel’s most iconic heroes. He’s become a recognizable figure and a household name, even to those who’ve never read his comics or seen his movies. Creating a pair of gloves that represented this character’s legacy was one of the toughest challenges we faced throughout this project.

As such a recognizable character, one of our goals for the Captain America Boxing Glove was to make them vibrant and powerful. We wanted you to feel as if you were suiting up before a battle as you were putting these gloves on, which is why we chose to split the design between the two gloves.

The left glove embodies Cap’s famous vibranium shield, a symbol of hope, protection, and freedom, while the right glove shows off his century-old uniform design and colors. Using Kanpeki brown leather of the palms and brown trimming we wanted to hammer home the callback of Steve’s heritage. His first uniform featured a brown leather jacket and utility straps.

Using two separate designs (one for each glove) doubled the rendering and manufacturing work, but that was okay, we didn’t want to take the easy path with this project, we pushed ourselves to design something unique. Intricate stitching, unique colors, and specially cut padding were used to highlight details of each glove, including Cap’s star and the detailing of his armor.

Collaborating with Marvel has inspired us to push our limits. Our top-of-the-line Tokushu gloves were transformed to reflect the design and style of Marvel universe heroes. The craftsmanship and our obsession with detail paid off; the results are stunning. High-performance superhero inspired gear you can wear to push yourself to new limits.

This series intends to give you a glimpse into the design and production side of boxing gloves throughout our collaboration with Marvel. Each article features one hero inspired glove in our Marvel Hero Elite line, giving you a breakdown of the character, our design inspirations, and info about the glove's production.

Our team makes it look easy, but creating these gloves was no simple task. Taking responsibility for a new piece of the Marvel universe is nerve-wracking, but as passionate Marvel fans, we were up for the challenge. We couldn’t be prouder of the final result.

We have more coming soon and to make sure you do not miss out, please subscribe to our mailing list for updates, release dates and more. 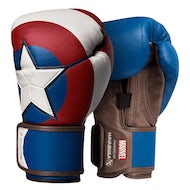